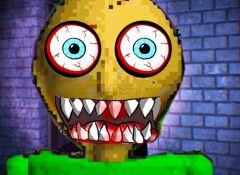 Baldi’s Basics is a horror edutainment game that made quite a lot of noise after it was released on PC. Now you can also play it online and enjoy the retro visuals and spooky atmosphere of the famous horror on the screen of your smartphone or tablet! It all started one day when nothing forebode a disaster. Your friend in Monster School asked you to go to school and pick up the notebooks he left there. But he didn’t warn you about Baldi… This teacher is a walking nightmare! He said he would give you the notebooks if you solve all the tasks in them correctly. How good you are at math? If not quite, prepare to run…

Baldi doesn’t like it when his student give wrong answers. He gets so furious that he can’t control himself. You will have a chance to make sure of it on your own when he makes his move on you flogging a ruler against the palm of his hand. Don’t wait until he reaches your desk, jump to your feet and run for your life! Baldi isn’t easy to shake off. The man is very persistent. He’ll follow you across the entire campus and when he finds you, he won’t show you any lenience! Since Baldi is a big authority at school, everyone you’ll see on your way will try and stop you. Learning the behavior patterns of other characters and finding a way to collaborate with them will be critical to your success. For instance, try giving a candy to a bully who doesn’t let you pass through a corridor. Perhaps that will change his mind!

Remember: if Baldi lays his hands on your, the game will be over! Avoid him by all costs! Seven notebooks won’t be that simple to find. And you won’t be able to leave school until you get all the math tasks right. So use your logic and your reflexes to keep Baldi calm and, if that’s not possible, at least to run away from him as far as you can!