Baldi’s Basics in Education and Learning 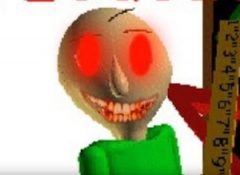 Everyone, who likes math, should raise his or her hand! How can happen that you don’t like math? Professor Baldi from Baldi’s Basics in Education and Learning loves math, and he will make everyone do the same thing. What? You don’t like solving math tasks? Well, you don’t need to try too hard here, because the result will be the same. Let’s not hurry, and see the peculiarities of the game in details.

The first thing that you notice in the game is its primitive graphics, which sends us back to 90’s years of the previous century. But you shouldn’t think that this feature makes the game dull. On contrary, it starts as a simple educational game, but later it turns in to a horror game. Your character is a student, who has to collect seven notebooks. Every notebook contains certain number of tasks. And if with the first one you won’t meet any problems, the last one will make you sad. It is completely incomprehensible, and you will definitely make a mistake. A person with super hearing, Baldi, will hear your error, and he will start chasing you.

He has a big ruler, and he will try to beat you with it. You have only one option: you should run away from him. But here is a catch: on your way you will meet different people, who would love to slow your pace and help in this way your crazy professor. For instance, headmaster will stop you to send you to detention, or you will see a talking broom, which will make you move slowly. Such every stop Baldi will use for his benefit, and you should be very cautious. The thing is that he starts chasing you from the very first error in a notebook, and there will be seven errors, for one in every notebook. And when it comes to the last mistake, Baldi is extremely furious, and is ready not only to beat you, but even kill. What can we do, if this professor is so mad about math?

Actually, you can’t do anything. All you can do is just run away, find necessary notebooks and solve problems, which are inside of them. And run away, because every notebook will make professor more and more furious.  Remember that Baldi will constantly increase the speed of his chase after you, because your every mistake will make him quicker. This is way too scary, and his rage will become enormous, and your poor character may die because of his crazy professor. But Baldi can hurt you only when you are inside the school. When you get out of there, you will stay alive and professor won’t be able to catch you. So, you have to be at least faster, if you can’t be smarter, than professor.