Baldi’s Basics in Education for PC 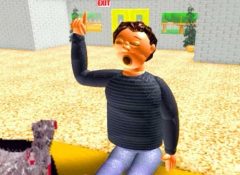 Who is that bald off-putting man with a long ruler and an angry look? This is Baldi, a math teacher at school where you are unlucky to go. The school day has just started and you already long to get home! To do that, you have no other option but to solve all the equations Baldi has prepared for you. Don’t be deceived by their seeming simplicity, though! While the first tasks will be relatively easy, the difficulty will grow with time. Beware of making mistakes! When that happens, Baldi easily flies into a rage. He will be so frustrated and infuriated that he’ll charge at you across the room and follow you into the hall and all up and down the stairs. Make sure he doesn’t catch you or you’ll have to start the game from scratch!

Baldi won’t be alone in his mission of capturing you. All the school will be helping him. On your run, you’ll meet various characters with one goal: to stop you from running away. But don’t worry, you can coax them into letting you proceed by giving them something from your backpack. For instance, a bully rising in your path will get much kinder if you offer him a candy. But not everyone will agree to your terms. The principal, for instance, will drag you to the detention room where you can be spotted by Baldi any moment. So Baldi isn’t the only person you have to look out for!

There are also some other parameters you need to keep an eye on. You won’t be able to run as long as you wish. Occasionally your stamina meter will run low and that you’ll have to eat a chocolate bar to refill it. However, it’s not prudent to use up all your stock of those at once. Better save them up for a critical moment. The game ends when you make an escape from the campus successfully carrying all seven notebooks filled up with the right answers. Intentionally primitive graphics, creepy sounds and action-packed gameplay won’t let you relax even for a split of a second! Play Baldi’s Basics and get a gulp of adrenaline and nostalgia!