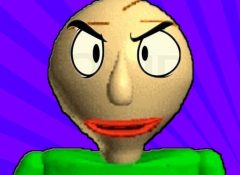 If you see a game with fantastic graphics, you suppose that it will be breathtaking, and in most cases you are right. But what if the graphics isn’t too cool? In most cases you will think that the game is boring and it doesn’t worth playing. Baldi’s Basics in Education and Learning is ruining stereotypes, and though it has a very simple graphics, it has a lot of fans because of the peculiar content. The Baldi’s Basics send us back to the 90’s, but it doesn’t mean that it is plain and you will understand it from the very moment you load the game. So, don’t pay attention at the graphics, better concentrate on the plot, which definitely deserves watching.

This indie game deals with the school life, but it contains also elements of horror game. You are a usual student, which tries to study hard, but something is constantly going wrong. Your main goal is to find seven notebooks and complete all tasks in them. The first problem is in the location of the notebooks – they are placed everywhere around the school, and you have to find them, which is not so easy. Looking for objects and dealing with math isn’t too cool, so why people love this game so much? Well, you will see it the very moment, when you give the first wrong answer in the notebook.

You have a very nice teacher, but he has problems with self-control. He thinks that all people should master math, so when you make a mistake, he becomes extremely furious. Of course, your task is to run away from him, but you will meet different people on your way, who will try to make you fail your mission. There may be various creatures on your way, even talking broom, and you need to learn how to cooperate with all of them. The game is full of hilarious dialogues, and you will be plunged into a splendid atmosphere of this horror game, when your teacher wants to kill you.

You may try hard to complete every task, but at least one of them doesn’t have a solution, because you will definitely make at least one wrong answer, because you don’t have other options. Even if you are good in math, you will be haunted by the professor, because this is the main sense of the game. This game is not too difficult, but still it has certain horror charm, which you will adore, despite of the simple graphics, which doesn’t seem to be so fantastic. You need to load the game, which is played absolutely for free, and you will understand how wonderful it is. Try to escape from the professor, and if you succeed in this, you will exit the school, and you will see big line, which will inform you that you won.